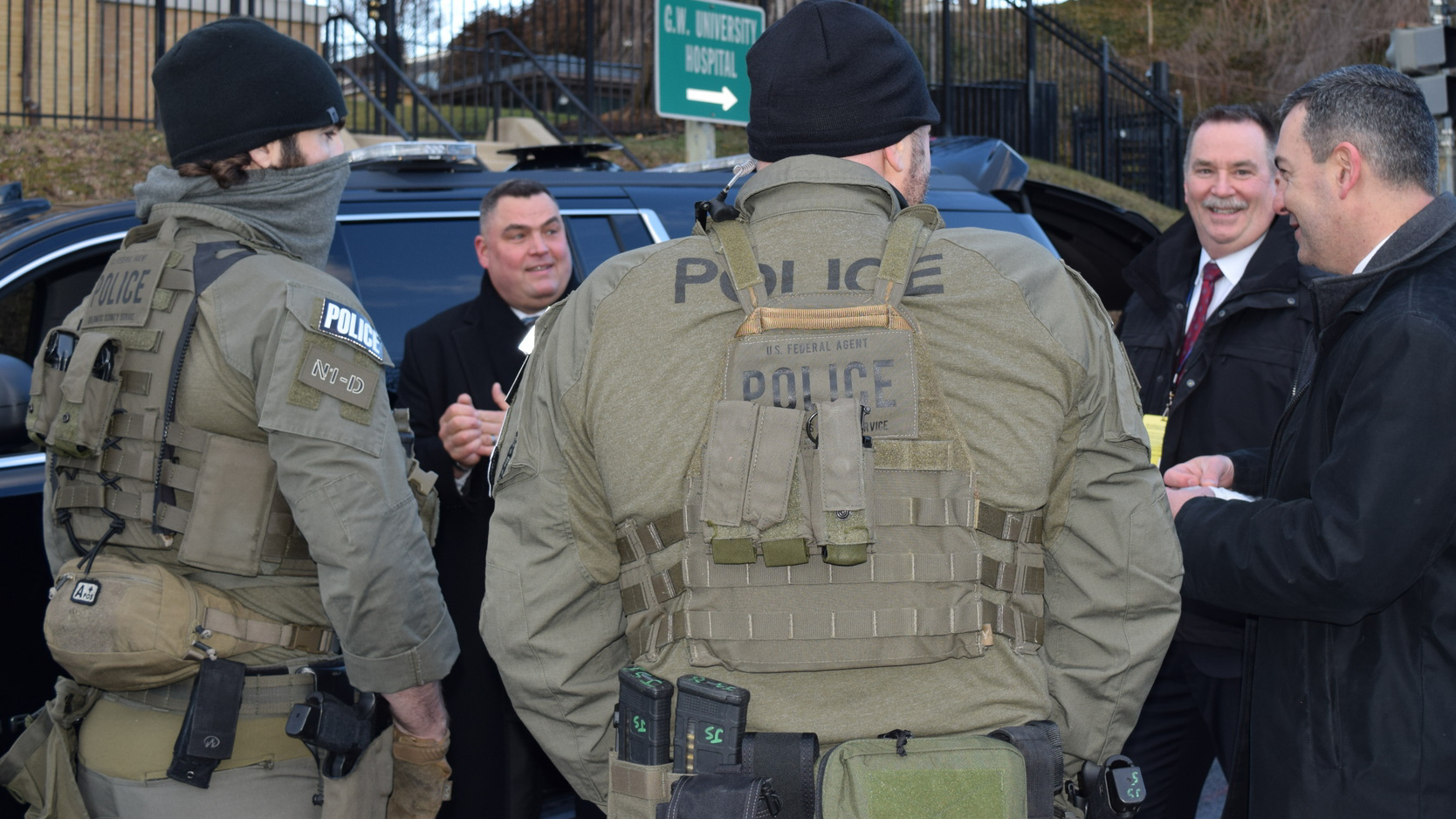 While many people across the United States stayed glued to their television sets during the 59th Presidential Inauguration, Jan. 20, Diplomatic Security Service (DSS) personnel remained vigilant. DSS worked with law enforcement partners to protect the Washington-based diplomatic corps, assisted in protecting U.S. officials, and provided other protective functions during a period of heightened security.

The 2021 Inauguration went off without significant incident, despite the violent Jan. 6 assault on the Capitol taking place only two weeks earlier. During the Jan. 6 attack, several hundred rioters illegally entered the U.S. Capitol Building in an attempt to prevent the confirmation of the Electoral College election results by the 117th Congress and the vice president of the United States. DSS had been part of the security planning for the Inauguration for several months. High-level planning is essential for any national special security event. However, in light of the Capitol insurrection on Jan. 6, those planning efforts across the government took on a new urgency.

DSS developed a security support plan for executing each of its core responsibilities, a true all-hands-on-deck effort with more than 100 special agents, analysts, and contract personnel drawn from all over the United States. Protective operations for then-Secretary of State-designate Antony Blinken had commenced just before the Inauguration, but the Inauguration also required the protection of the entire Washington-based diplomatic corps and their safe transportation to and from the Capitol.

The weekend before the Inauguration, DSS special agents in Protective Operations, Protective Intelligence, and Mobile Security Deployments (MSD) were in full training mode, providing briefings on the use of force, de-escalation techniques, firearms refresher training, communications, crowd control, and other defensive and security techniques. The methods and tactics used by the Jan. 6 attackers on the Capitol were also reviewed in-depth, and response tactics were discussed. Additionally, threat intelligence indicated the possibility of violent activity in the run-up to the Inauguration. In response, DSS’s Office of Protective Intelligence and Investigations established three enhanced Protective Intelligence Response Teams and helped staff multi-agency command centers from Jan. 16-21.

Inauguration Day began with up-to-the-minute briefings provided by the DSS Command Center, including other agencies’ information on road closures, traffic updates, and possible protest activities. MSD teams and other support personnel were assigned to protect the diplomatic corps buses and routes from the Department of State’s Harry S. Truman Building (HST) to the Capitol and back. With memories from the Capitol attack still fresh, careful consideration was given to ensuring the defense of the HST building in coordination with Diplomatic Security Uniformed Protective officers. Additional responsibilities included providing enhanced protective details and counter-assault teams for the outgoing secretary of state and his successor, and quick reaction teams to be on call if additional crisis response capability were required. DSS also provided agents to the federal tactical team led by the U.S. Secret Service (USSS) and multi-agency counter-surveillance teams led by USSS inside the protected zone.

But the work of DSS during this challenging time was not limited to Inauguration security. Immediately following the Jan. 6 attack on the Capitol, DSS was contacted by the U.S. Capitol Police, who asked for assistance from the Diplomatic Security Peer Support Group to help them in dealing with the stress and the trauma that remained in their ranks after the violence and loss of one of their officers during the attack.

“I spoke with the acting chief of police and offered our condolences and unwavering support and assistance in any way we could help—as we carry out our ongoing law enforcement and security mission,” said Acting DSS Director Carlos Matus during a video message to staff at the end of the two tumultuous weeks.

Additionally, as the 2021 Presidential Inauguration wound down, Matus applauded the DSS workforce for their ongoing support and bravery.

“It is because of the flexibility, dedication, and professionalism that each member of DSS brings to train, equip, and deploy the teams that make our mission successful.”